I was born in the shrubs by a porch!

One morning the owner of the house was mowing the lawn and stopped when he saw me trying to make a run for it away from the lawnmower. I know it was a lawnmower now but at the time I thought it was a dragon! It sounded like a dragon and belched smoke everywhere so how was I supposed to know? I was only about two weeks old!

The owner quieted the dragon. I tried to get back into the shrubs but I had lost my way. The owner picked me up and carefully put me back, deciding to leave the lawn mowing for another day. 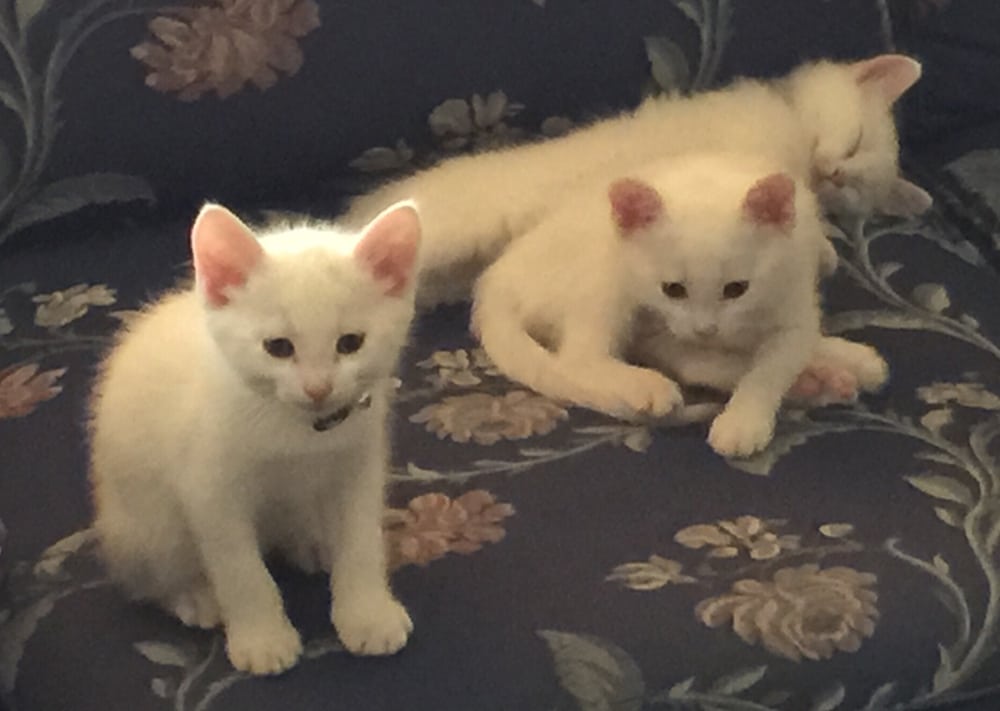 From day one we all had our own personalities

About a week went by. The owners watched my mom go back and forth, feeding and looking after us. They knew that there was at least one other kitten besides me as occasionally they would see another white blob amongst the bushes. The owners left food and water out for my mom and tried to see if she was friendly. She would not, however, go anywhere near them.

Kittens in the shrubs – dilemma!

The owners were in a dilemma, whether to let nature take its course and see more feral cats on the street or adopt and take on the responsibility of finding homes for us. 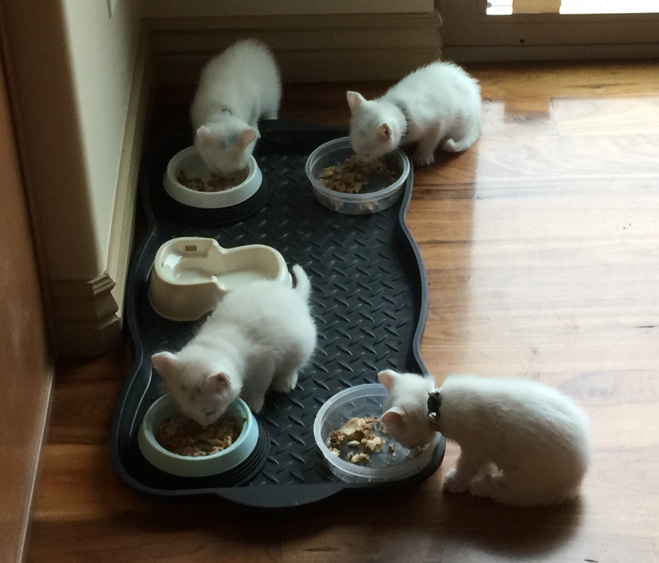 It was not long before we were eating solid food

We became pretty active and they would occasionally spot us playing on the lawn which was getting pretty long by now.

Adoption won out and the owners scrambled behind the scrubs to get us out. They were very surprised to find that there were in fact four of us. All white and scrambling in all directions. As they caught us, they counted, “one”, “two”, “three” and “four”. They immediately put blue dots on our heads with a marker pen so they could keep track of which one of us was which. 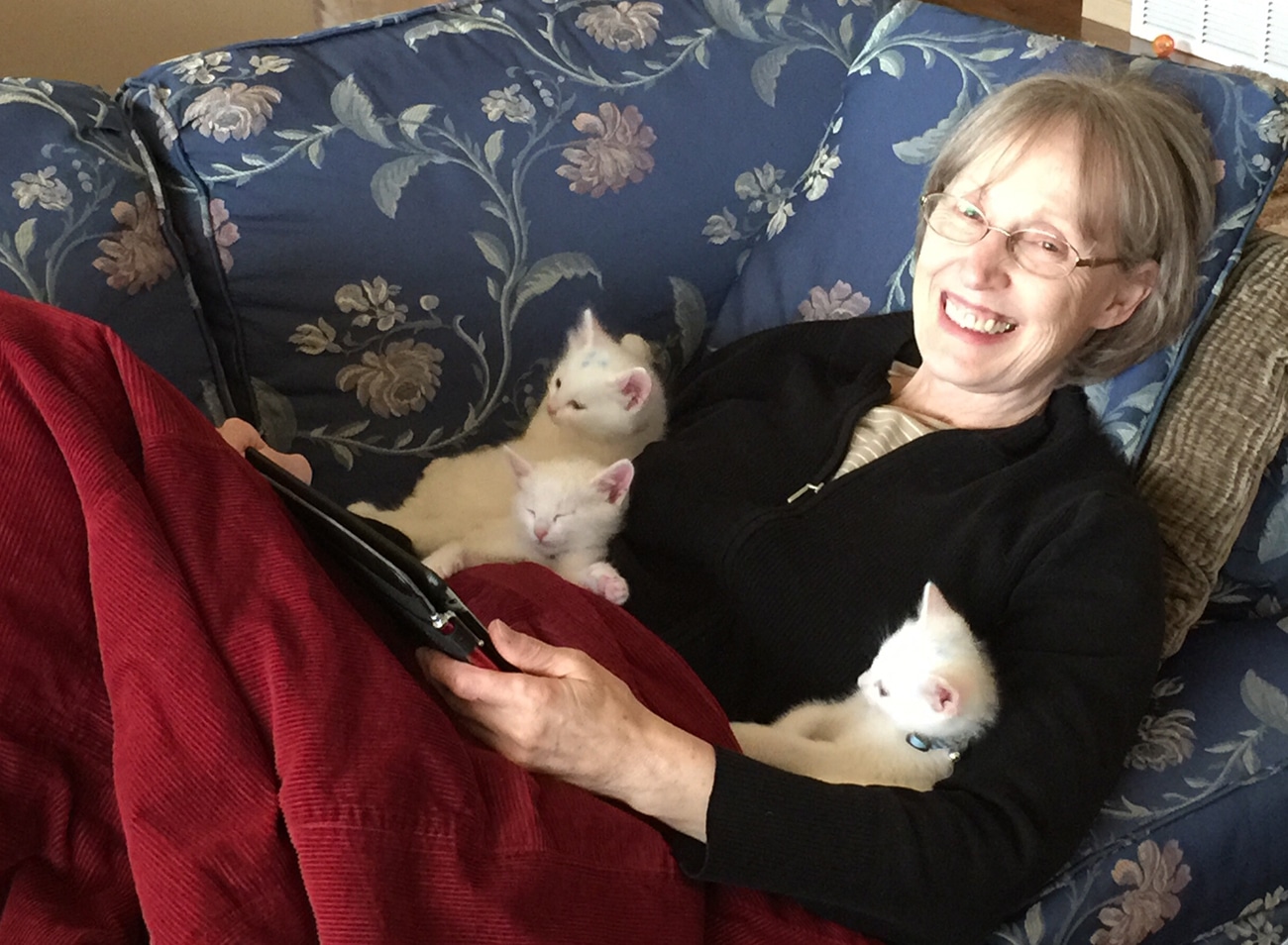 We got lots of cuddles every day

Our mum was calico, but we all turned out pure white. Once they took us in the house my mom left and did not return, despite being left lots of food and water.

We were bathed, fed kitten milk and little bits of solid food. Our new adopted parents gave us lots of cuddles and kept us warm.

It was not long before we got our names based on the dots on our heads. Alpha, Beta, Gamma and Delta.

From day one they put us on a litter tray several times a day and were surprised when we used it. I’m proud to say that we all got the idea immediately and never had a single accident. 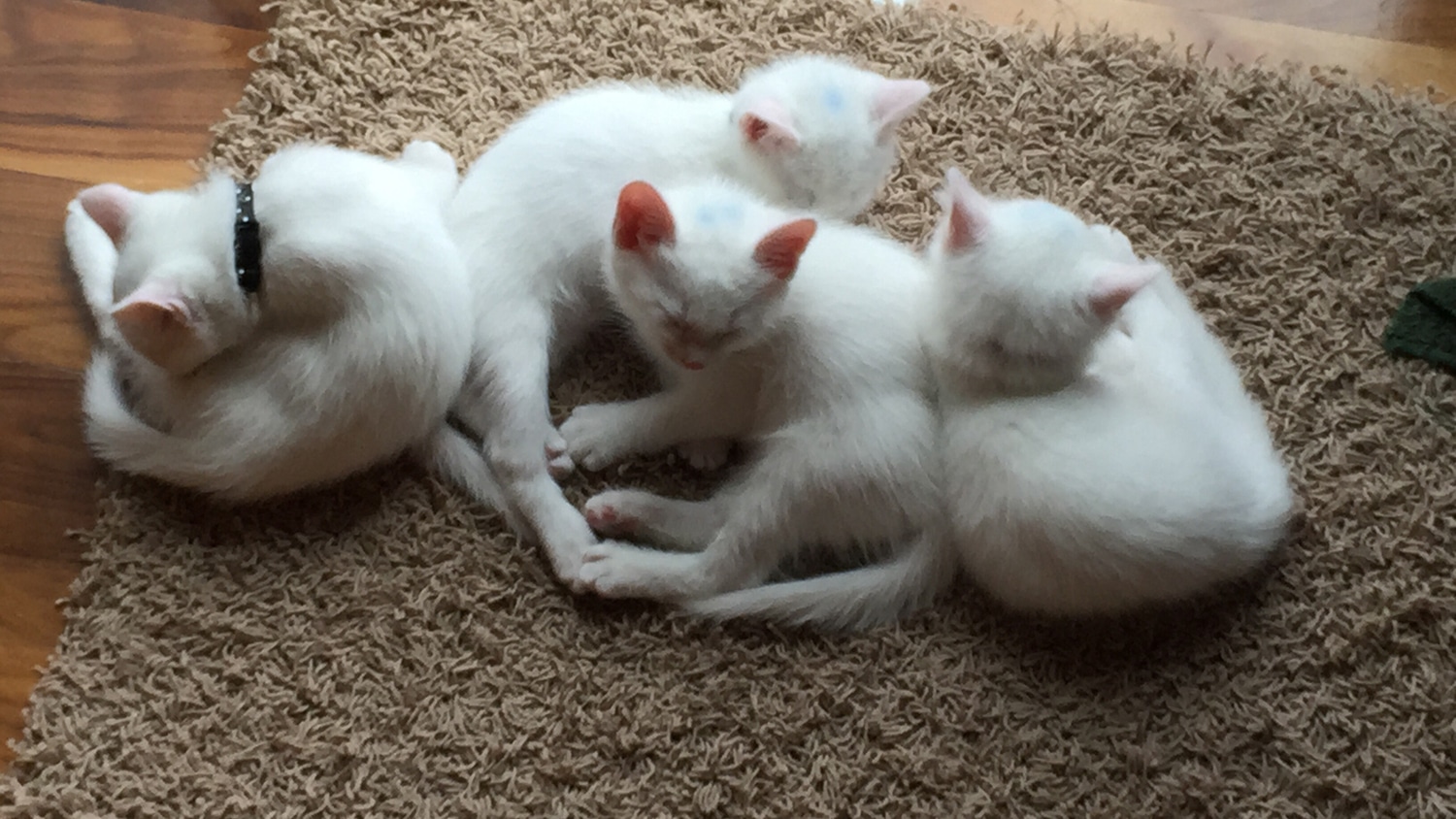 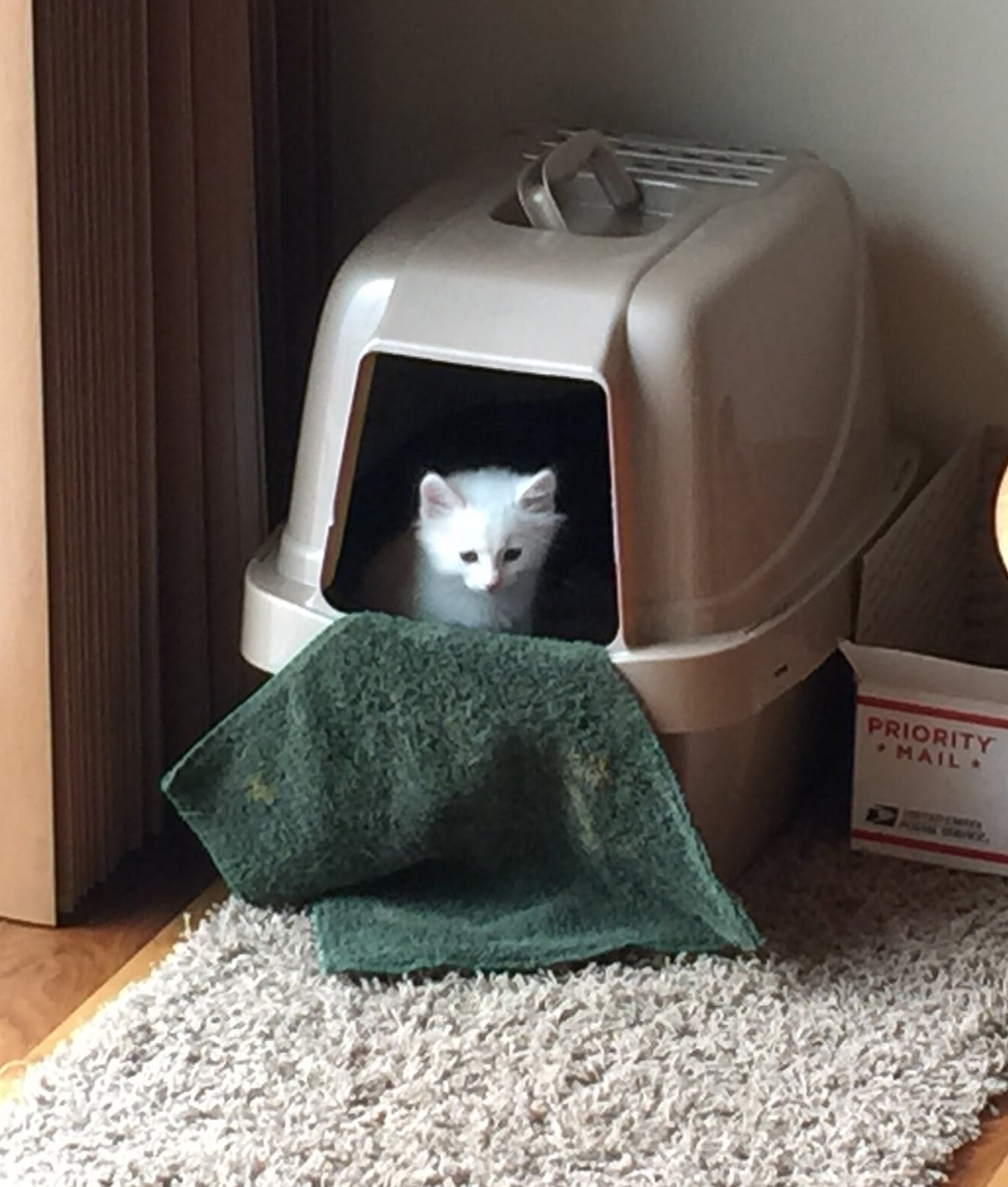 Using the litter was an easy trick to learn, we just needed a little help to climb in and out.

Alpha wanted attention all the time, he was very loving and just wanted to be cuddled.  I’m Beta and I was easy going and liked to follow my dad everywhere.  Gamma was the fur-ball of the family, was independent, and always like to sit in his own place next to his mom.  Delta was an explorer by nature and was constantly disappearing every chance he got.

Although we all started out with blue eyes, I was the only one that kept them. Alpha and Delta’s eyes went grey, and Gamma’s went amber. At first, they thought Gamma was a girl as he had lots of long hair and looked so fluffy and cute and they gave him a pink collar. We all turned out to be brothers though.

My new dad made us a special house to keep us all in one place. It was a special kitten castle with nice warm material in the bottom and small dark covered places to curl up and sleep in. It had a separate bathroom and lots of things to climb on. We all had a lot of fun climbing and playing with each other.

Several times a day our new parents would take us out, play and cuddle with us and let us explore the house. We grew very quickly and learned how to get into and use a proper litter when we needed to, all by ourselves. We just needed a rag in place so that we could climb in and out by ourselves.